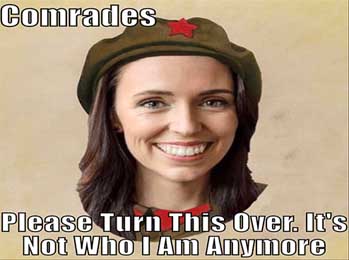 Witchhunt as media and the left lose their minds over #TurnArdern

I think it’s clear we are beginning to reach peak psychosis with the lunatic left. I recall (I think) Jordan Petersen once explaining that laughter can cause physical pain to people suffering from delusional views unsupported by facts.

It seems to me that the Orwellian reaction of the left to the light-hearted #TurnArdern movement is seriously deranged and showing a violent and disturbing side of the rank and file passionate lefty.

For those who don’t know the back story here are the facts. A while back a fairly mild NZ Twitter troll – who goes by the handle HonestCol (@Coltheman1) – started posting images of bookstores/supermarket checkout magazine racks showing where he’d reversed covers that portrayed Socialist Cindy. This is of course a joke at the expense of the towering narcissism, vanity and self-promotion of our PTPM, what better way to get under the skin of a towering ego and personality cult than hiding their face.

As is often the way, many saw how funny and ironic this was, and started posting on HonestCol’s Twitter feed images of themselves doing the same, reporting such things as “St Heliers Pak’n’Save – all clear now”. It became a meme (and we all know how the fragile left hates a meme don’t we? You Stupid Boy – being a perfect case in point.

So now, it appears HonestCol has been doxed by the NZ Herald and as a result HonestCol (I think a retired tradie) is experiencing death threats! Think about that, the Labour party is going to attack a working class brickie because of a joke – these lunatic lefties hate us, they don’t represent us, the thought of a joke at their expense causes them so much pain they turn violent.

Of course, the Streisand Effect is kicking in, and now everyone is able to join in and enjoy what was a pretty tiny act of civil disobedience. Titans of the left, such as Chris Trotter, have commented on this – expressing disbelief and deep, deep affront about the dark and depressing nature of such a movement.

And I’m sitting here thinking, what the fuck is the matter with you leftist see you next Tuesdays – left wing movements have:
– masked uniformed black-clad stormtroopers who appear well-funded and well-supported who turn up on demand to disrupt any free speech event
– Extinction Rebellion, who glue themselves to streets to prevent honest law-abiding people go about their business
– Green activists who are setting bushfires around the world so they can feed the narrative that there are bushfires because of Climate change
– tens of thousands of shrieking females wearing vagina hats to protest against a democratic election result
– racism, sexism and ageism as their core equality policies

And the Left thinks making a joke of a vain stupid little girl by turning a magazine cover is fascism? Holy fuck, they’re out of their tiny minds! Seems to me the vilest thing we could do to these nutters is start up a Twitter account and follow Col – to show we are with him and infuriate the fascistic left even more.

Corbyn is Cindy, Cindy is Corbyn. She is not us, We are not her.

Yet More Lies from Liarbour