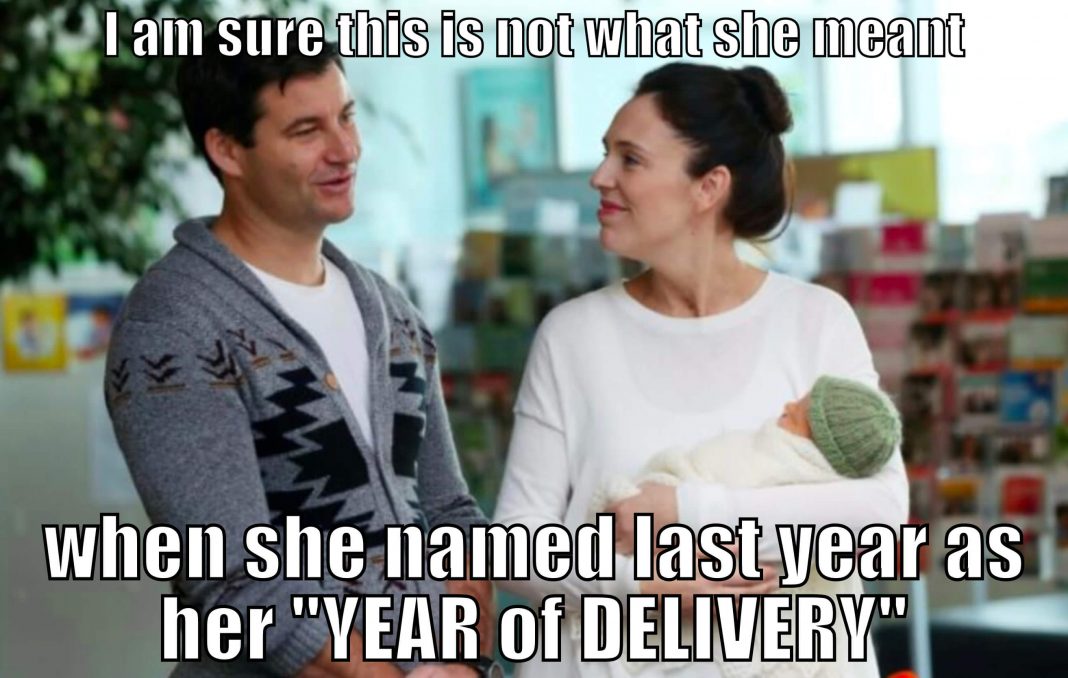 Prime Minister Jacinda Ardern has called 2019 the year of “delivery” as her Government hopes to fulfil its promise of change across New Zealand.

Speaking to the Labour party caucus at a retreat in Martinborough, Ms Ardern said the previous year had been “huge” as the Government focused on setting up the infrastructure that will enable a “significant change in direction for New Zealand”.

“[We were] reinvesting in those core services, in health and education and housing through our Budget, setting up what is required to turn around the degradation of our waters,” she said.

“That work has now been set in place. 2019 is now the year that a lot of delivery will be required of us and is actually already underway.”

Ms Ardern mentioned child wellbeing strategies, work on the tax system, and mental health policy as among the “long list of areas” where the Government was in “delivery mode”.

She made special mention of climate change and the Government’s proposed Zero Carbon Bill as “headline” pieces of work progress would be made on.

Climate change was a significant discussion point for the Prime Minister during her trip to Europe, where she met with several world leaders and environmental figures, like Sir David Attenborough, at the World Economic Forum in Davos.

Working towards a free trade agreement with the European Union (EU) after Brexit was also a key part of Ms Ardern’s agenda while she was overseas, and she said she was surprised by the EU’s level of enthusiasm at trying to get those deals concluded this year.

“A trick for us will be to make sure that we don’t compromise on quality as we go through that process. But I came away feeling hugely optimistic,” she said.

During the trip, Ms Ardern met with Prince William, the Duke of Cambridge, to discuss mental health strategies and she found not as many countries as she had suspected were actively working to break down stigmas.

“I underestimated the degree to which we are at least having a conversation around mental health and wellbeing when others are not,” she said.

“It is not a widely held conversation and that was really highlighted by the fact that the Duke of Cambridge pointed out that when he started out his campaign, he couldn’t find any well-known individuals from the UK to stand alongside him.”

In May, the Government will also deliver its “Wellbeing Budget” which Ms Ardern attempted to pitch to international leaders in Davos.

“This has been an on-going conversation,” she said. “But what really interested me is that there aren’t too many countries that are moving beyond score cards, so measuring wellbeing in some form or another using perhaps what the OECD has generated around better living and better life”.

She said that Finance Minister Grant Robertson and herself had met with the OECD secretary-general, Angel Gurria, who was enthusiastic about seeing New Zealand go beyond just using Gross Domestic Product to measure success.

“There are people watching what we intend to do here,” she said.

Although Ms Ardern said at the end of the day it doesn’t matter what the international community thinks and her Government’s main focus would be the New Zealand voters, “it is interesting to have in the back of mind that what we are doing is different”.

“Turning the ship around” wouldn’t be perfect on the first try, but she said the Government would build on the foundations it had created.

Although Ms Ardern said at the end of the day it doesn’t matter what the international community thinks and her Government’s main focus would be the New Zealand voters,

This is the lie. If she really was concerned about what the New Zealand voters thought, why does she spend so much time overseas. The name Part-Time PM seems very apt for someone who is never home.

And This from The Guardian.

Style isn’t always a bad thing in politics. There is a lot to be said for a politician who can channel emotions and values in a way that salves the soul or mobilises the masses. That’s the type of powerful leadership that makes history. Jacinda Ardern has been an exceptional world leader in this way. In 2019 the New Zealand PM responded to the 15 March terrorist attacks with an emotional and thoughtful response that was a lesson in leadership.

Understandably Ardern’s strong and appropriate statements made her the “politician of the year” in nearly every political pundit’s end-of-year summary. Similarly her pronouncement about the Muslim victims that “They are us” was clearly the quote of the year.

For all that, there are an enormous number of New Zealanders who need more than hugs from their prime minister. They voted for the parties of government because they wanted to see a promised “transformation” rather than business as usual.

It was supposed to be the government’s “Year of Delivery” – or so Ardern declared to the press at the beginning of 2019. It was a neat line, because 2018 had been the “year of the working group” in which little reform was carried out, on the promise that the experts would hand the government some major new policies to implement.

However as 2019 rolled on and key promises such as KiwiBuild’s 100,000 affordable houses, a capital gains tax and alleviating child poverty failed to eventuate, the “Year of Delivery” line became a stick with which to beat the government at every turn.

We have now learned that Ardern’s “Year of Delivery” promise was only ever a slick catchphrase dreamed up by a speechwriter, not Ardern herself.

Last week Beehive insiders told leading political journalists that the “Year of Delivery” promise was actually a spin-line produced on the fly by the PM’s top spin doctor to get his boss out of a tight situation when she needed something memorable to say at the start of 2019. The explanation from the Beehive was to convey that it’s not actually fair to hold the PM to account for a catchphrase that was never intended to be taken so seriously.

It is extraordinary that something presented as a solemn promise to the electorate is now being explained away as nothing more than a manufactured PR soundbite. But, in fact, this episode perfectly epitomises the year in politics – showing how PR has come to dominate.

Simon Bridges’s National party is no different. It was reported earlier in the year that his office now employs more social media experts than policy advisers. National seems determined to emulate the successful online advertising campaigns of conservatives in Australia and Britain. Never mind the integrity of those campaigns.

These advisers appear to be encouraging National to make inroads into swing voters by appealing to law and order emotions, rather than via any real promise of material progress in people’s standard of living. The party’s nadir was the promotion of an anti-gang “Strike Force Raptor” police unit that might be deployed to stoke fears of rising crime. And then there were the successful but utterly empty critiques of the prime minister (such as suggestions she is only a “part time PM”).

In fact no one will be surprised that New Zealand now has many more public relations practitioners than journalists. The latest census results show about 8,000 people work in PR, greatly overshadowing the roughly 1,600 journalists working in print and broadcasting. Other calculations have put the ratio of PR to journalists at 10:1.

Many of the PR professionals work directly for the politicians, government departments, or local government authorities. “Communications” is a booming sector of politics and government. RNZ reported this year that over the last five years public sector communications staff numbers have risen 60%. Job opportunities in political PR will doubtlessly only improve during election year.

Of course good communicators are needed in politics – especially in the political debate of an election year. We would be poorer for it if politics was all substance and no style. But superficial slogans of “Let’s do this” or taunts about a “part time prime minister” shouldn’t cut it. We should be demanding more substance from our politics.

Yet More Lies from Liarbour